A Few Trips Around Chaiyaphum

Trying to ascertain exactly what is in Issan (NE Thailand) is a difficult task. Any decent habitat is often swamped with locals escaping from the oppressive heat (and who can blame them). The worst is Tat Ton Waterfall, a place I have visited a few times, but left because of the sheer numbers of revelers. As with this trip, I did the same. However, there are two other waterfalls in the local area (actually there are three on the map, but I can't find the third, nor can the locals when asked!), and I revisited them once more. Tat Fa is the bigger of the two and is fairly open with lots of rocks in the sunshine, surrounded by trees at the edges. Sounds perfect for odes, yes? Well, maybe it is, but this place was bone dry. No water anywhere, save a few tiny puddles at the edges and water running under the rocks. Therefore, there is hope when the rains come, but not right now. The only resident (other than Pantala flavescens flitting around in the sky), was a solitary female Indothemis carnatica obviously waiting for the rains and a possible mate. After searching for a few hours, it was time to move on. Bypassing Tat Ton waterfall, there are two additional waterfalls, I opted for the one furthest away, Pha Ing Waterfall. Upon arrival, it had clearly been dammed to retain the little water that was left. I searched the area taking the odd photo of butterflies, and then I saw an orange Ceriagrion sp. perching in the grasses, deep under cover. Fortunately, it was rather placid and I could get close to it. I knew straight away that it wasn't C. chaoi as the abdomen was too slender and elongate. C. malaisei? Possibly, but it appeared to be too elongate for that species, too. I have tentatively placed it as C. malaisei ... maybe Tom Kompier can help (I have added a couple of poorly shot appendages to try and ascertain what species it is). If it can't be IDd from these photos, I will return. Other than that and a few common paddy field species, there was nothing to report. 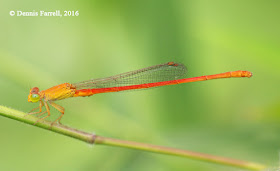 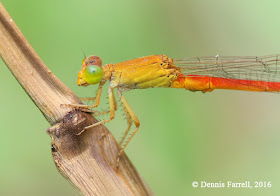 The terrible appendage shots (do these help at all?) 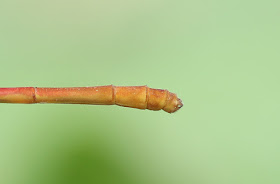 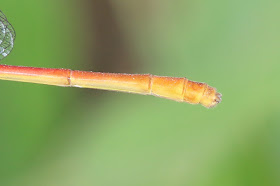 The sad-looking Indothemis carnatica, desperate for the rains, just like me! 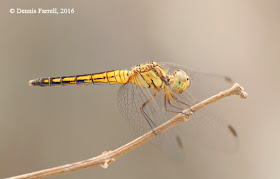 Finally, a bit of good news and a positive ID that I saw last year! Indolestes Gracilis ssp. now has a name ... Indolestes gracilis expressior Kosterin, 2015. So, welcome to Thailand! My second Indolestes discovery for Thailand. I actually saw this last year and thought it would be the same as the one Oleg described from Cambodia, but I didn't get good photos of the appendages last time round so couldn't be sure. However, after 8 trips to the place where I first saw it, I managed to see it again. One record shot ... and it was gone again, carried off by the wind!!!! I sat in deep mud and almost cried. Determined, I searched again and again and again, getting dizzy from walking around in knee-deep mud staring at grass. After four hours, I was going to give up. I walked back to my bag where I had first spotted it, and there it was again! Forgetting my net, I had to cautiously use my fingers and managed to catch it! Now with decent photos of the appendages, I can be sure with the ID. 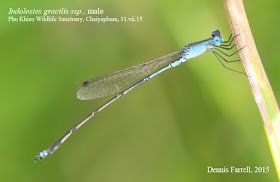 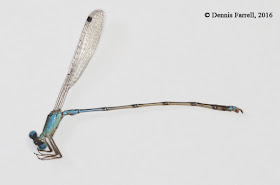 ... and the appendages of the one I saw this time round: 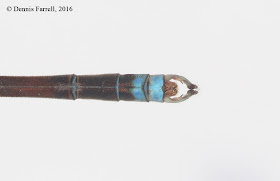 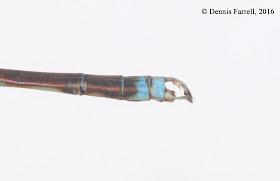 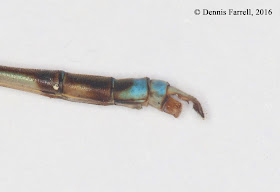 The rest of the place was still dry, although I did find a new little pond that was manic with dragons everywhere, including Anax indicus and Camacinia gigantea and Ceriagrion chaoi all new records for me at this location. 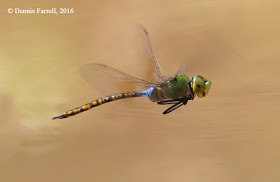 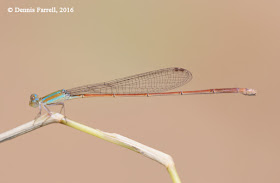 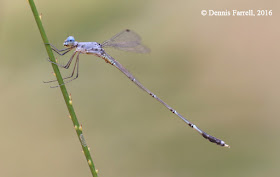 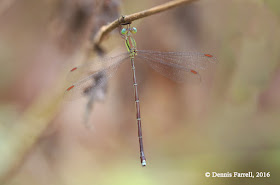 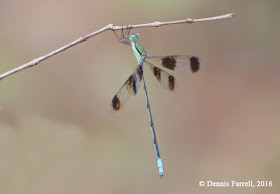 A young male ... with hardly any wing colouration 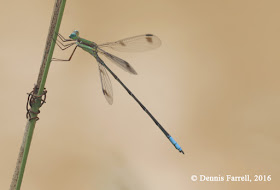 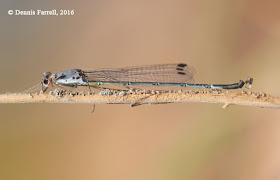 My first sighting of C. chaoi. Not the best photo, but the banking was deep and steep and full of mud. You get the idea. 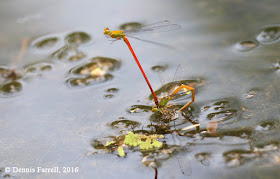 This day started badly and got worse. First of all, I decided to search a number of places I frequented several years ago near Nam Nao town centre in Petchabun and was shocked to see that large area of marshland had given way to the local school development. Secondly, the brilliant little natural pond I discovered where I saw Nepogomphus walli, Idionyx selysi and the incredibly rare Phyllothemis eltoni, which was just past the town (and difficult to access), had also been raped by man. The pond itself is fine, but the trees and everything else is now full of banana trees and large areas dug out of easy access with bottles of beer and packets of whatever strewn everywhere. So, leaving the two waterfalls alone for now (too early in the season), I shot back over to Nam Nao National Park about 40-odd kilometres away. I decided against the large (and full of water) Helicopter Pad lake as I have been there a million times and headed to two great trails just further along. The first is a 4 kms walk and I have found many a great species there during my last few visits. However, this time, everything seemed different. On one side of the path the trees/scrub was heavily charred from a forest fire and all the little ponds were bone dry. The whole place was parched. I carried on, wilting in the blistering heat. I was constantly looking down into the bushes for signs of life as I walked. Suddenly, I was shocked. I had walked to the end of the 4 kms pond trail where the brilliant little natural pond was and standing there was a herd of elephants (8-10 individuals), some in the water, others on the path. I was less than 10 metres away. I crunched dead leaves under my feet as I halted. The elephants turned and looked at me. I froze. They didn't. Two started to move towards me, hesitantly. Others moved into the trees at either side of me, sounding their trunks as they went. All I could do was slowly turn and walk. I walked at pace for about 100 metres and then legged it for about 2 kms until I almost died from exhaustion. Luckily, they didn't follow or could have been dead for sure. I walked the rest of the way, jumping at every branch or leaf that fell. I made it back to the car and sat there for about 20 minutes. Finally, I decided to try the 14 kms stream trail which goes into Chaiyaphum - and you can drive there! It's a bumpy ride but you can do it. So off I went, stopping at the first stream, just a few butts and no uncommon dragons to be seen. Then, right in front of me was another, massive elephant just waddling along the path grabbing at leaves high up. It was amazing. They were everywhere and you usually don't see them at all. I think it is because we were all going for the same areas ... water! They were concentrated in small areas. Eventually it moved off and I carried on to the second stream (and only had to park 50 metres away). After all that, it was very quiet, though I did see Prodasineura doisuthepensis in Chaiyaphum for the first time and AND manage to get decent shots of it, as it is usually seriously skittish. Ad that was it, other than spotting another, even larger elephant on the pathway on the journey back slowing my progress. NE Thailand is a desperately dry place at the moment. Please rain soon or many species may disappear locally!

The solitary species I photographed ... 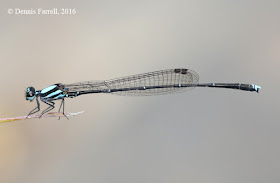 Next trip: God knows ... anywhere where there is water and no elephants!